What is a creative industry, and does it exist in Belarus?

Any person working in the arts understands that everything begins with creativity. As for “industry”, I barely know anything about that. Industry is perhaps related to serious industries and product design.

But you are precisely that – a designer...

Probably, well not precisely so. What is a designer? It is someone who is in close contact with production, tries to introduce a new aesthetic. For example, some material is produced, but it’s not fashionable. A designer can breathe new life into it. Design helps to remember that there are forgotten materials and introduces them. To simplify the attitude towards objects. This will happen if a new idea can be found. The task of the designer is to influence people, their thinking and to change it. Where there is an enterprise, there should be a designer. Actually, I’m not a theorist. 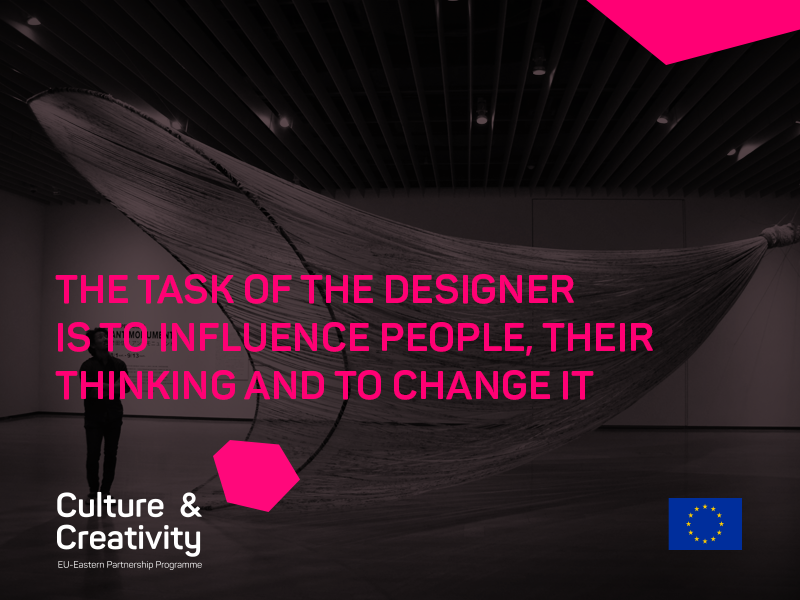 You said that you were not a designer, so what would you call yourself?

Now I don’t care anymore. I graduated from “design”, there “the thought process was set”, but it didn’t come in handy for anyone. Perhaps, only those who left and got into, let’s say, the automotive industry have fulfilled themselves. After all, a designer is essentially a profession for the industry. A designer without industry, without enterprises, is the same as an enterprise without a designer, he cannot exist. For a designer to work in an enterprise there should be economic potential, the means to change the line, for example. Once I tried to take part in a project at the Minsk Refrigerator Plant... But at the time, it was impossible to implement something new there.

Where did the difficulty lie?

It was impossible to change colour or form. The factory was simply an assembly line. Perhaps, now everything is different and the factory has changed, but it was like that then. For collaboration with a designer there should be the will and financial means. One should be able to look ahead. It is only for those people who look into the future.

What is more important for a designer: beauty, aesthetics or functionality?

It’s not about beauty, but rather about being how it should be and what it should be. Aesthetics and beauty are two different things. You know, there’s a saying that “art will save the world from beauty”… The idea arrives at some mark. It should be caught, “catch a star”, and the object of luxury becomes a consumer object. 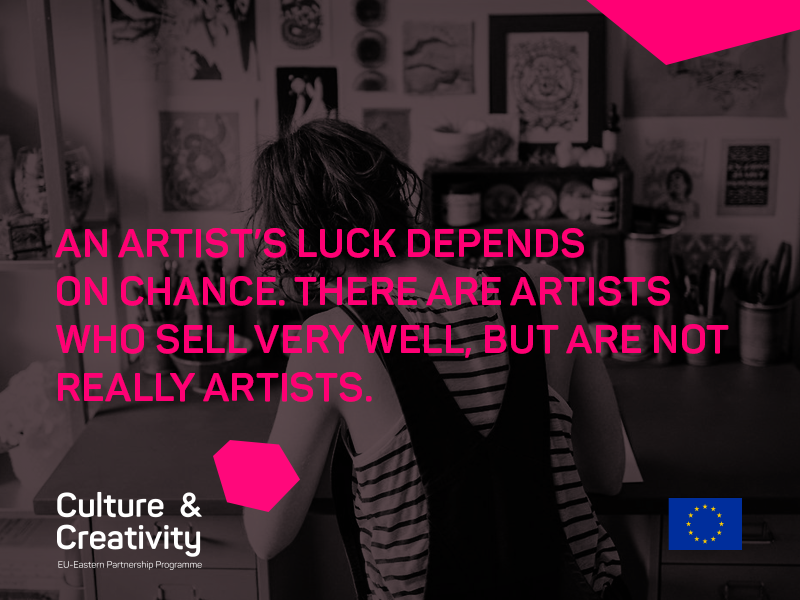 Can you give examples of when luxury objects became mass-market objects?

For example, cars, computers; they used to be luxuries and now everyone has them.

What projects in the field of design could be in demand today in Belarus?

It’s not the time to talk about design when industry is at a standstill. On the other hand, I know that good designers tried to enter industry and change something. But it has not been possible for now.

Your works are becoming fashionable and trendy. How did you achieve that?

Not just my works. Many young designers who are doing a great job. What I do is perhaps becoming fashionable through inertia. When a person is little known, there is interest in him. But it changes nothing at all. An artist’s luck depends on chance. There are artists who sell very well, but are not really artists. They just call themselves that, try to work in the old way, without receiving schooling. I believe that it is how you’re presented, “publicised” and how are you able to capitalise from this. I don’t know one good artist who was “marketed”. It is the mediocre ones who are often “marketed”. 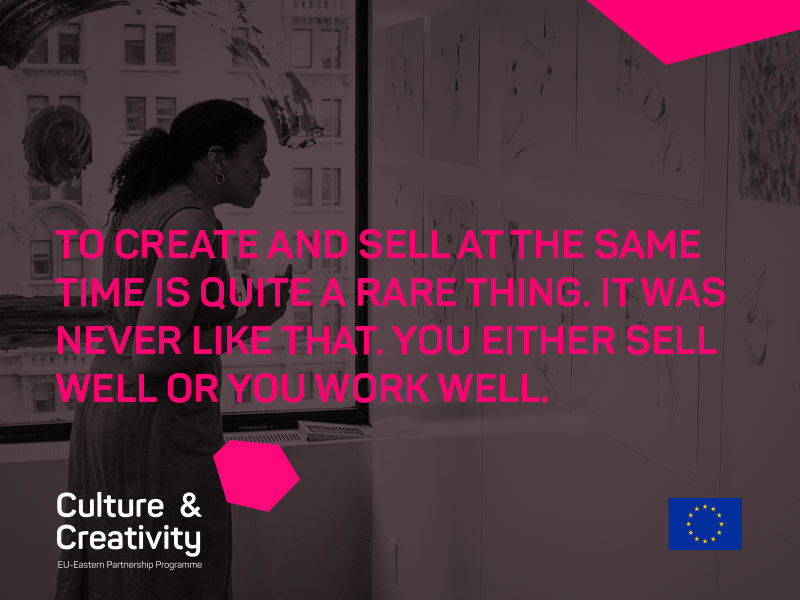 Do you make efforts yourself to increase your popularity?

Of course not. It’s stupid, I don’t know how to do it. The fact of the matter is that art in our country is not a market. Consequently, there are no people who would have promoted me.

Would you be interested in collaborating with art managers?

Probably yes. But, by and large, I don’t care. I won’t stop working.

Don’t you think that the challenge for contemporary artists is not only to know how to create a product but to sell it too?

To create and sell at the same time is quite a rare thing. It was never like that. You either sell well or you work well. It’s like that here for the time being. 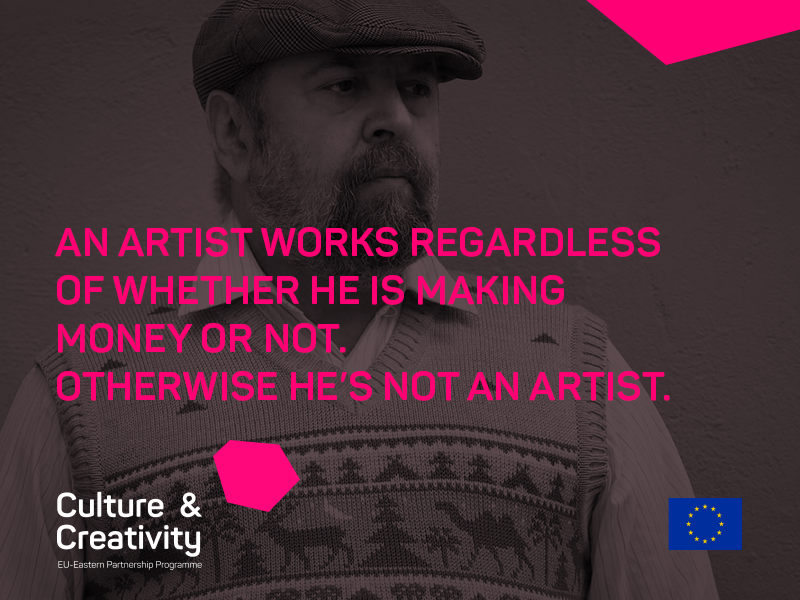 Have you ever thought about emigrating? Would you like to leave, and why didn’t you leave to somewhere with more opportunities?

One should understand in the name of what he is leaving. If my work was appreciated there, I would have been a wealthy man.

But everybody thinks that’s the case...

I would like to disappoint those who think in such a way. An artist works regardless of whether he is making money or not. Otherwise he’s not an artist. I do various things. Now it’s orders for corporate identity, advertising, clothing. For someone to buy your work, you first have to make it. As for emigrating, first of all, I was not invited. Second, for an artist what is important is the place where he can work. You can emigrate only in extreme cases, deprived of a studio, for example. But I have never thought about it. What to change? People don’t leave because they have it good. Emigrating is huge stress. I get a pension, although in order to pay for the monthly rent, I need four of my pensions... People have the right to decide their destiny. Even if those who have left, who have managed to earn money there, return sooner or later in any case. 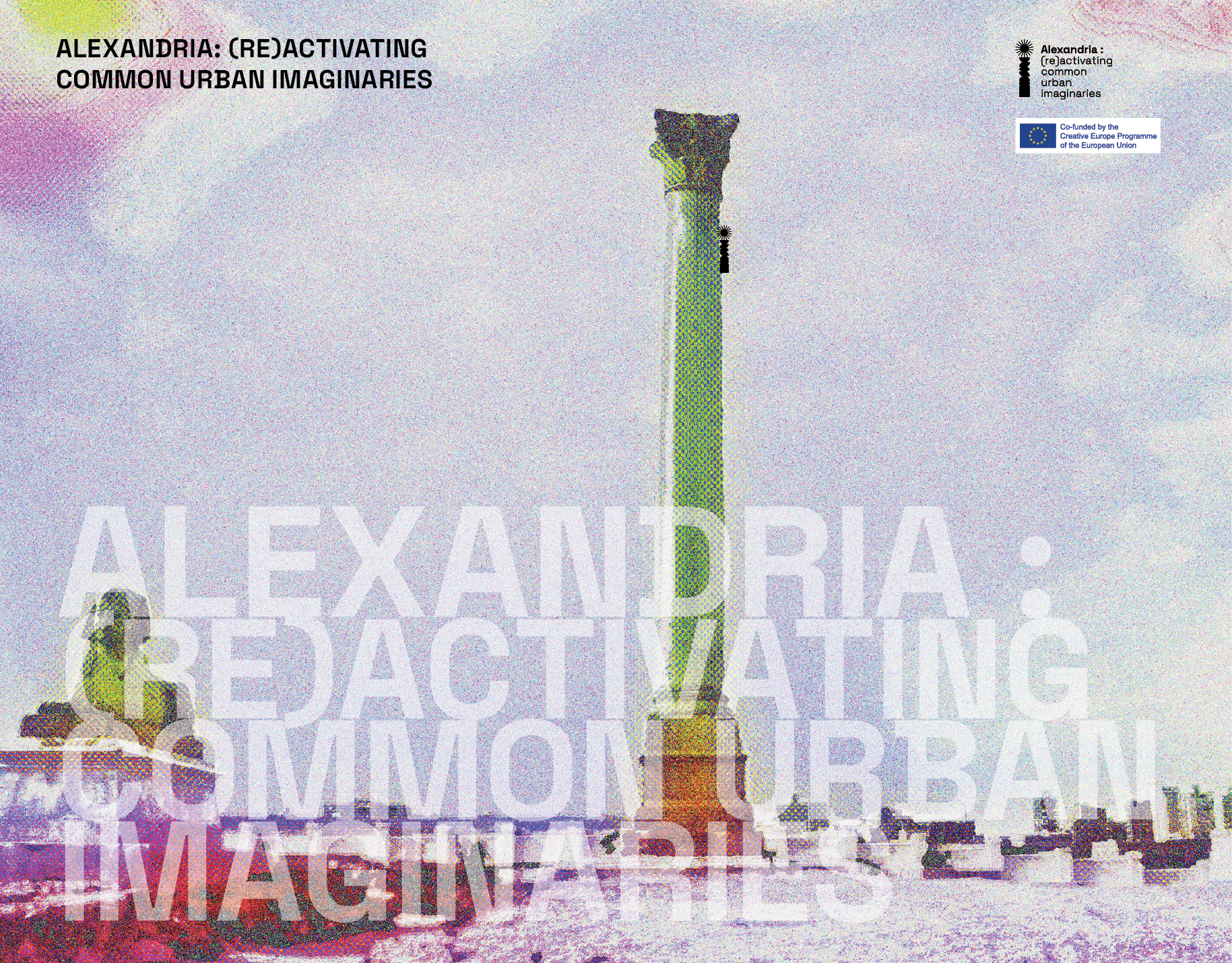 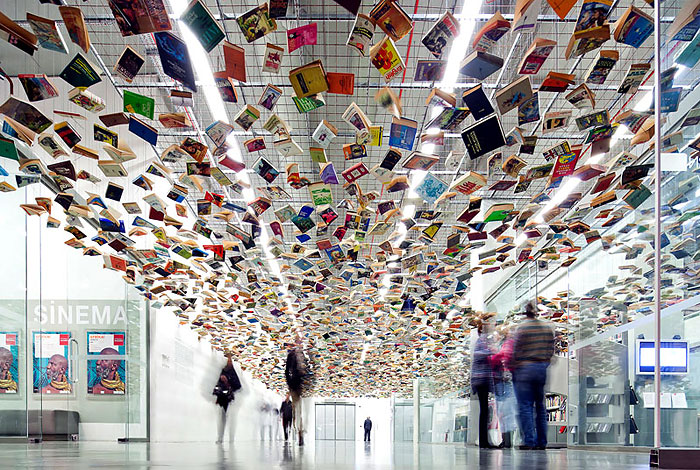 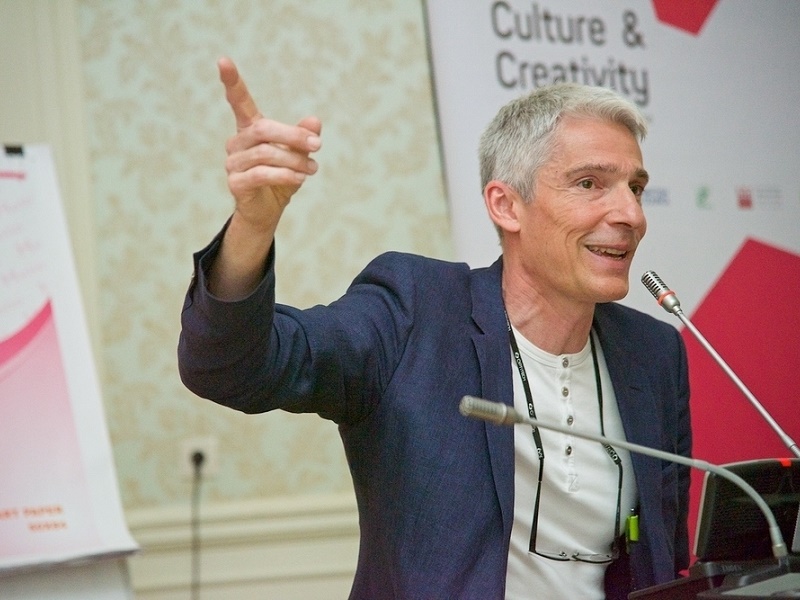 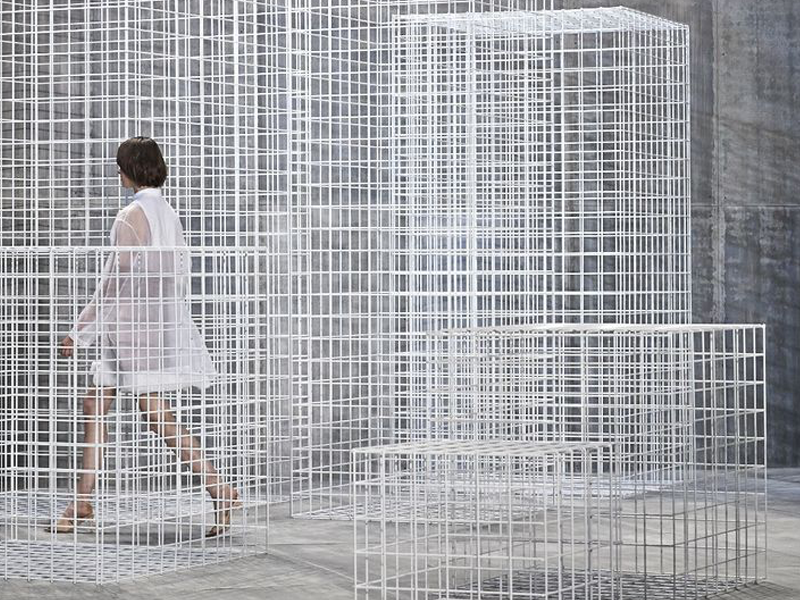